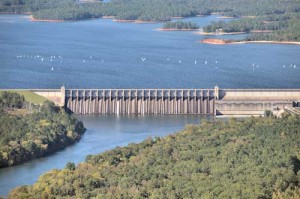 Clarks Hill Lake, also known by its more recent official name of J. Strom Thurmond Lake and Dam, is one of the southeast’s largest and most popular public recreation lakes. Built by the U.S. Army Corps of Engineers between 1946 and 1954 as part of a flood control, hydropower and navigation project, authorized purposes now include recreation, water quality, water supply, and fish and wildlife management.

Each year millions of people utilize the many public parks, marinas, and campgrounds conveniently located around the lake to pursue a variety of outdoor recreational experiences — making Clarks Hill/Lake Thurmond one of the 10 most visited Corps lakes in the nation.

The 1966 Flood Control Act authorized the building of Trotters Shoals Lake and Dam on the Savannah River between Clarks Hill Lake and Hartwell Lake. This lake was later renamed to commemorate a late senator from Georgia, Richard B. Russell who was very important in supporting the building of dams on the river. This created a movement to rename Clarks Hill Lake after J. Strom Thurmond, the longest serving senator in U.S. history who was from Edgefield on the South Carolina side of the lake. This movement gained support due to the senator’s great popularity in the area, and in 1988 the project was congressionally renamed “J. Strom Thurmond Dam and Lake.” It is still referred to commonly as Clarks Hill.